This article was originally published in the February 2020 issue of Reactions.

“I think of 2019 as being a renaissance year for ESG amongst insurers and reinsurers,” says Mike Krefta, Chief Executive Officer of Hiscox Re & ILS, who believes 2019 was the tipping point when Environmental, Social and Governance finally became an essential part of the conversation at a variety of organisations in financial services.

“It feels to me like now is the time that ESG starts to get more of a prominent role within the way companies are run, and it’s when the level of expectation from society translates into corporate action,” he adds.

When discussing ESG, Krefta’s enthusiasm – and his sincerity – are palpable. Since 2018 he has served as Hiscox’s executive sponsor for ESG, a role in which he is empowered to help guide the organisation through the mindful process of viewing its entire business through a lens of corporate responsibility.

“At Hiscox, we take our role in the world pretty seriously and want to play a responsible part in society,” he states. It should surprise no one, then, that the company has been carbon neutral since 2014.

Krefta acknowledges that the term ESG “has been bandied around now quite a lot,” and various companies can have myriad priorities surrounding it. But for Hiscox, its strategy around being a responsible business is far more multifaceted than most – and this year will be further crystallised.

“The E, the S and the G all have very unique and differing components,” says Krefta, who adds that in 2020 a distinct and clear framework for ESG and the way that it is interpreted within Hiscox will be published.

Krefta offers a preview: “Effectively, the framework splits the E, the S, and the G into its constituent parts, and then has guiding principles around it – core themes driving the kind of activity we want to take part in for each of those different areas.”

In Environmental, for example, “a big part of that for us is understanding climate risk and also changing the conversation from being reactive to being more proactive.” That means not simply charging more in the future after events occur, but rather devoting more resources to resilience efforts as well as changing the way in which policies with climate risk considerations are viewed and priced.

Creating products that address the emerging climate insurance gap globally is another critical step. He cites as an example FloodPlus, Hiscox’s London Market coverage solution for U.S. homeowners. Distributed through U.S. wholesale brokers, FloodPlus offers higher limits and a wider scope of cover than policies provided by the National Flood Insurance Program (NFIP) and includes a simpler definition of what constitutes a flood.

The Social component, he says, for Hiscox includes “everything from diversity and inclusion, to having an engaged workforce, to having products that our customers can rely on,” he explains. It is a balance of global themes and local execution, to ensure the company can truly make a meaningful impact.

“Charitable giving would be included under that. Giving back in terms of time, as well, not just money. Partnerships with different organisations with whom we can make an impact in our local community, or in places where we trade and have customers.”

Those on-the-ground efforts include beach cleanups in Bermuda, planting trees in the UK and in the U.S., and schemes in which essential life skills are taught to girls in school and out-of-school environments in underprivileged areas.

The Governance side, Krefta notes, “is about having the right board structures and oversight of what we do as an insurance and reinsurance company. It’s about having the right policies, procedures, controls and disclosures in place, because it’s important that those aren’t just taken for granted, but you have those documented and you live up to them.”

Krefta adds that Hiscox’s younger-generation staffers “just see this as a hygiene factor. They don’t see it as an exceptional piece of work, or something that sits extracurricular to what we do. They expect the company to act in a socially responsible way, and we have a duty as an employer as well as through our role in society to make sure that happens.” 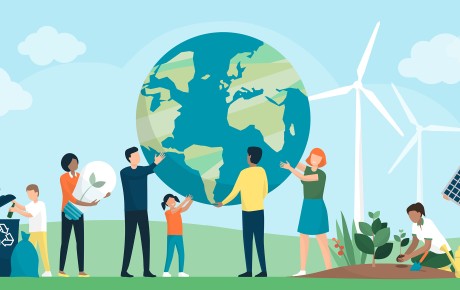